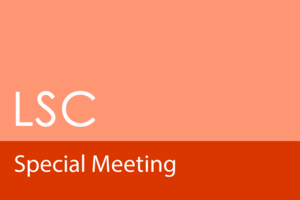 Note to the school community from the Local School Council chair, Cassie Creswell:


The only items on the agenda for the Special Meeting of the Jones LSC on 11/16/2021 are the ones listed here.


Four LSC members called a special meeting to discuss Dr. Powers' conduct at the 11/9/2021 regular meeting; that discussion will likely happen in closed session per the vote of the council during the meeting. Since we are meeting anyway, the LSC can vote on a letter/statement/resolution with respect to CPS policy on SOPPA as requested by two CS teachers last week; we can approve old minutes; and, if need be, we can do some check approvals, so those items were added to the agenda as well.


Some points for people to understand about the meetings of public bodies (like local school councils):

The phrasing that Mr. Hilbrands sent out to the parent body was copied from the phrasing that I used to announce to the council that four members called a special meeting. There was no need to share that very formal wording rather than the standard announcement of our meetings. The wording that was initially posted on the website “A special LSC meeting will be held on Tuesday November 16, 2021 to discuss Dr. Powers contract and other agenda items” was simply incorrect. In addition, if you look back at our previous special and emergency meetings of which there have been at least a half a dozen this year, those meetings were not announced via mass email as far as I recollect, so I understand why people are agitated and have formed the false impression that this must be some highly significant meeting.


Additionally, the rumor circulating about revoking Jones’ Selective Enrollment High School (SEHS) status is simply untrue. Per page 8, “Further, at the end of each school year, the CEO may make determinations regarding the continuation or adjustment of any of the District’s magnet and/or selective enrollment schools and programs. Any change that would eliminate a school’s magnet or selective enrollment status is subject to Board approval. Any change that does not result in a change in status for the school is subject to approval by the CEO.”


Please send questions for the council to jonescollegepreplsc@gmail.com or to me at cassie.lscjones@gmail.com